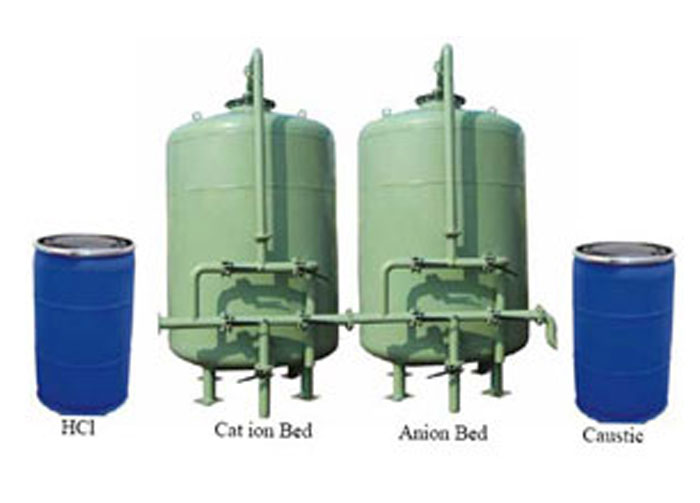 Deionizers
AQUA LIFE GUARD RO System is a leading provider of deionization solutions. Our water deionizers are rugged, pre-engineered, pre-assembled, standardized units that minimize expensive installation and start-up costs. We have designed our Deionization systems to maximize the efficiency and repeatability of the unit during the service and regeneration modes

The Process of Deionization or Ion-exchange
In the context of water purification, ion-exchange is a rapid and reversible process in which impurity ions present in the water are replaced by ions released by an ion-exchange resin. The impurity ions are taken up by the resin, which must be periodically regenerated to restore it to the original ionic form. (An ion is an atom or group of atoms with an electric charge. Positively-charged ions are called cations and are usually metals; negatively-charged ions are called anions and are usually non-metals). The following ions are widely found in raw waters:

Deionization
For many laboratory and industrial applications, high-purity water which is essentially free from ionic contaminants is required. Water of this quality can be produced by deionization.The two most common types of deionization are :

Two-bed deionization
The two-bed deionizer consists of two vessels - one containing a cation-exchange resin in the hydrogen (H+) form and the other containing an anion resin in the hydroxyl (OH-) form. Water flows through the cation column, whereupon all the cations are exchanged for hydrogen ions. To keep the water electrically balanced, for every monovalent cation, e.g. Na+, one hydrogen ion is exchanged and for every divalent cation, e.g. Ca2+, or Mg2+, two hydrogen ions are exchanged. The same principle applies when considering anion-exchange. The decationised water then flows through the anion column. This time, all the negatively charged ions are exchanged for hydroxide ions which then combine with the hydrogen ions to form water (H2O).

Although more efficient in purifying the incoming feedwater, mixed-bed plants are more sensitive to impurities in the water supply and involve a more complicated regeneration process. Mixed-bed deionizers are normally used to ‘polish' the water to higher levels of purity after it has been initially treated by either a two-bed deionizer or a reverse osmosis unit.